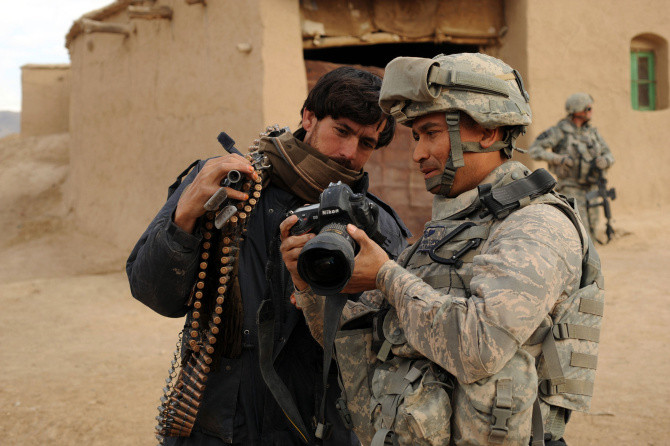 In Sontag’s first chapter, she introduces her ideas about graphic, gruesome images in modern society and how they contribute to violence and war. Firstly, Sontag emphasizes the difference between the male and female satisfaction in and desire for war. According to Sontag, most men “like war”(Sontag, 3) because there is “some glory, some necessity”(Sontag, 3) associated with war in perpetuating manliness that women do not feel. While traditional gender roles for men and women were created based on a patriarchy, our contemporary society acknowledges the equality of men and women so this claim is innately biased.

Next, Sontag transitions to explaining how photographs are an important form of communication as they serve to show images that the “privileged and the merely safe might prefer to ignore”(Sontag, 7). This concept of conversing through photography allows a person to temporarily enter the lives of another potentially vastly different from his/her own life. Photographs can be used as a “call for peace. A cry for revenge… [or] bemused awareness”(Sontag, 13) of terrible images that can either numb people or empassion people. By distributing an image of suffering and/or violence, people and governments can use this emotional baggage for multiple purposes.

Violent images imprint in the brains of observers, thus they are an important tool for preventing or encouraging force and change.

Continuing her exploration of photography’s impact on human emotion, in Chapter 6 Sontag discusses the apathy that comes with over-saturation of gruesome, horrible images. When there are so many of these images distributed, people often “feel obligated to look”(Sontag, 95) at the disgusting images, yet so few people internalize the photos and ruminate on their impact and importance. Unfortunately, people are self-absorbed and concern themselves with this horrific terror for a split second before turning to another, more present issue. Lamentably, violence is incredibly prominent in society, so there is a large “quantity of images”(Sontag, 102) distributed. This proximity to images of suffering results in a sense of helplessness and a loss of compassion. Oddly enough, repulsive images tend to attract a certain dark side of humanity, exposing that humans are drawn toward distorted images. These impactful images often only result in an “initial spark”(Sontag, 103) instead of a continual desire to help. Maybe people enjoy looking at suffering because it shows a positive contrast between a painful life and the relatively pleasant life they may live. If this is the case, then these comfortable and safe people should use their privilege to motivate them to productive action.

The influx of distressing and repugnant images distributed in society leads to an apathetic response in observers.

Chapter 8 focuses on the struggle of remembering versus forgetting horrific images and occurrences. Many disturbing images innately communicate the message: “Don’t forget”(Sontag, 115). However, Sontag emphasizes the importance of thinking about images rather than merely remembering them. Society often associates proper morals with remembering abominable events and regards forgetting these events as unethical behavior. But simply recalling an image or event does nothing to explore why the event occurred, why it was significant, what can be learned from it, and why it should be remembered. Solely watching an event or seeing an image is different than interpreting and internalizing it. Sometimes, people need to stand “back and think”(Sontag, 118) instead of jumping to conclusions about images. Similar to ruminating on images, people should do the same with other people. Often times, humans are quick to judge others on appearance, like an image. But if a person took the time to learn the history underneath the appearance, then the world would be more accepting and civil.

Memory of certain events or disturbing pictures is only important and useful if the observer takes the time to investigate the causes and effects of the actual image and uses this newfound knowledge to influence change.